i cannot believe 2011 went by so quickly!  i have been in new york city with granddaughter, katie kelly,
every week and it has been such a grand time! i leave monday mornings and 3 hours later i am in riverdale.
then i return to harrisburg on thursdays (sometimes fridays if we are doing something fun).  little katie kelly
has captured the hearts of everyone in our family and those we encounter!
our daughter katie and her ray just celebrated their first anniversary!....i was going to blog daily/weekly
about the preparations for their wedding....i was also going to report on katie kelly's first year.....well,
the time went by and here we are!  i do, however, have many, many photos!....so, as i reminice i can
share these photos.  here is what our katie kelly looks like today at 16 months 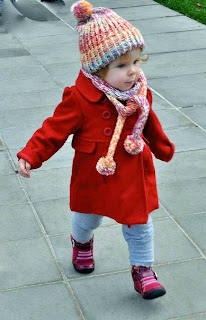 the hat and scarf were custom designed and hand knit by daughter tina.  this photo was taken at
the new york botanical gardens where we went to see the train show.

we had a delightful christmas celebration.  we were all in new york the week before the holiday
and attended the STREB performance at the park avenue armory.  we then went to rockefeller
center to see the tree.  it was magnificent!  we went to brasiere and the girls had wine and we just
sat and enjoyed the illumination of the tree and other lights. christmas eve was number 1 granddaughter,
madeleine's, 18th birthday!  as i keep saying, 'time is flying by'!

the cookbook is still on the back burner of my brain......lately much of what i have prepared i have
photographed for future use.

the girls introduced me to pinterest.com and i have been enjoying perusing that site.  it's great for
good ideas and inspiration!

since it is january, i will be (like most of america) getting rid of lots of "stuff", purging and re-organizing.
i will be back in new york with katie kelly january 9th so i have to get busy as i only have a few days left!
Posted by trish at 6:13 PM