The Importance of Lemon, Lime and Orange Zest!!!

It is Memorial Day Weekend and I have a quart of home grown strawberries (@$5.99/qt.) and
home grown rhubarb (@$3.00/bunch) so I decide it is time to make the fabulous Strawberry-
Rhubarb Cobbler!

I have already done the shopping for the weekend at two different stores plus the farmers market.

All the ingredients are set out and I realize that a most significant, albeit subtle, ingredient is.....
drum roll please.......zest of an orange!

Well, s and d!  I do not have an orange!  However, another drum roll, if you please.....I do have
grated zest of oranges in little packets in my freezer!

Voila!  I take a packet out of the freezer, chop it up nice and fine and sprinkle it over the berry/
rhubarb mixture.  Nothing could be easier!

The reason I am going through this whole scenario is to let you know that many, many recipes
call of a bit of zest of lemons, limes or oranges and the very easiest trick is to zest any of them
prior to use and freeze them!  (please tell me I am not sounding like Martha on this!)

It really is just the easiest to do!  I put the zest on saran, roll it up and put it into a little baggie.
In my freezer I have three baggies containing......you guessed it!....the zest of lemons, limes and
oranges.

This has served me so very well over the years.  I don't know where I first got this tip.....okay,
it probably was from Martha!.....nonetheless,  something that takes such little time and effort is
a huge get for anyone who cooks and bakes a lot!

Yummy Macaroni and Cheese.....possibly best ever! 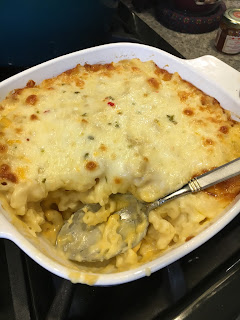 Everybody loves, loves mac and cheese!  Children love it....even if it is out of a box!
Adults love it.....mmmmm.....with goat cheese, a stilton, so very gourmet!

Each time I had great expectations........and they all fell short!

Something that should be so simplistic.....creating so many pitfalls and problems!

One recipe may be nice and cheesey but not saucey enough.....or the reverse!

I remember when this was the most economical dish.....cheese was not expensive back
in the day (!).....of course, we were not using imported, gourmet cheeses back then either!

Anyway, I determined that for my own personal taste I liked my mac and cheese to be quite
saucey with a lovely cheesey taste.

Every time I would see a recipe for mac and cheese, I would make it....following the recipe to
the letter.....and always was left "wanting"......

Then I found (recently) this recipe on the internet by the chunky chef........I did make some
changes/additions but I think I finally found the "one"........please try it and let me know if you
like it as much as I did!!!

1.  Preheat oven to 350* and grease a 3 qt. baking dish with butter.  Set aside.
2.  Bring large pot water to the boil.  Once boiling, add 2 T. kosher salt, dried pasta and cook as
per directions for pasta.  Drain well.
3.  While waiting for water to boil, grate cheeses, mix, if not using separate cheeses,  and divide into bowls:  3 c. for sauce, 1-1/2 c. for middle layer and 1-1/2 c. for topping.
4.  Melt butter in large saucepan over medium heat and sprinkle in flour and whisk to combine,
stirring for about 2 minutes to "cook" the flour.  Slowing pour in 2 c. milk, whisking constantly,
til smooth.  Slowly pour in remaining 2 c. milk (half and half), again whisking constantly til smooth.
Stir in salt and pepper and cheeses, stirring til smooth.
5.  In large bowl, combine pasta and cheese sauce.
6.  In buttered baking dish, add half the sauced pasta.  Top with 1-1/2 c. grated cheese.  Add remaining sauced pasta and top with 1-1/2 c. grated cheese.
7.  Bake for 20-30 minutes til bubbly, melted and golden brown.....and yummy looking!

( can be made prior....BUT....take out one hour prior to baking....sauces tend to "seize" when
chilled.....let it come almost to room temperature before baking!)

Trish Giordano: Hospital Nightmare!: It has been quite a while since I have posted......and, as you all know, I usually post about foods, family and friends! However, this pos...
Posted by trish at 5:47 PM No comments: 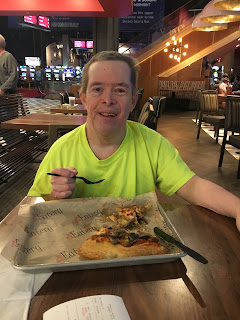