Retro Recipes During the Pandemic 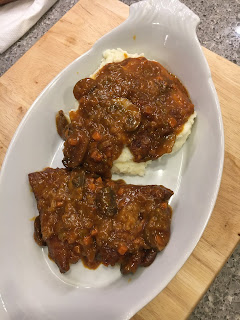 Since the start of the Pandemic, I have cooked a lovely meal nearly every single night.  (I mean, what else is there to do in isolation after all that cleaning and purging, right?)

I have also taken great pride in not duplicating too many meals during these, geeze Louise, what, almost 8 months now!

As  I have mentioned before,  I have watched many, many videos of famous chefs, would-be chefs, and wanna-be chefs. ( The latter you must be careful with as some of them do not know a dry measuring cup from a liquid measuring cup or how to "spoon" and not "scoop" flour when baking or how to measure dried herbs and seasonings!  Woe to the novice who attempts to follow the wanna-bes!)

What has been quite enjoyable has been researching menus from different eras and discovering many "gems" that we have not enjoyed in a good while.  Also thoroughly satisfying has been putting a 2020 twist on many of these menus!

For instance, the other night I prepared Swiss Steak with Mashed Potatoes.  Many of you may well remember Swiss Steak from your childhood.  It was popular in the 1950"s, made of a cheap, tough cut of meat that would miraculously become a tender "melt in your mouth" joy after baking for a couple of hours.  Almost every recipe for Swiss Steak contained tomatoes.  I assume that was so there was acidity to further "tenderize" the tough cut of meat.  My husband does not like cooked tomatoes so I was faced with a predicament if I wanted to proceed with this particular dish.  A mirepoix, beef stock, tomato paste, Marsala wine, Worcestershire and sautéed crimini mushrooms did the trick!  After two hours bathed in this mixture I had the sought after tender meat!  (and the sauce was lick your plate delicious!)

Chicken and Dumplings, Chicken Soup with Rivels, Ina's Meatloaf and, oh, one disaster!:  Swedish Pot Roast......braised in vinegar with brown sugar and cinnamon.....who knew?  It was so very, very sweet....my husband told me I did not have to prepare that recipe again!!!

Researching menus has become my "work, project, goal".  It is quite interesting to learn where a recipe originates from, how it became popular, what changes can be made to it.  The most interesting fact, in my opinion, is how there really are only so many recipes and each culture, country, peoples put their own spin on it to make it their own.

If you are on Facebook, you will see my postings nearly every night of What's on the menu?  In this blog, I will continue to post in more detail the menus and sometimes the recipes as well.