The Quest for the Perfect Meatball!

I adore meatballs.
NO, I mean I really, really adore meatballs!
I also like to think I make wonderful, great-tasting meatballs!
The other night the B O B and I were talking and somehow the subject of meatballs came up and he was saying some times my meatballs are great and other times,  not so much.
WHAT????????
Oh my heart!!!  Give me smelling salts!!!!

When we first married, I was given Bob's Mother's Recipe.   They were hard, dense "hockey pucks".
That was what he was raised on and what he (thought) he liked.

That did not last very long.

I discovered Rocco DiSpirito's mother's meatball recipe many, many years ago and I fell in love with
it.  She put chicken stock, parsley, garlic, and onions in a processor and barely used any breadcrumbs,
Parmesan cheese instead, and I thought they were the tastiest ever!  Typically, I used fresh ground beef.  I then baked them in the oven (super healthy, don't ya know!) about twenty minutes and then cooked them in my homemade sauce for several hours.
Geez Louise!  I received so many compliments!


So, when the B O B made that comment about my wonderful (or not so) meatballs......I began a
major investigation!!
Of course, I turned to the nonnas of the world.


Now, two things I found  very interesting: some were pure ground beef fans while others insisted on the beef/veal/pork meat mixture.
The other interesting factor that cropt up over and over was the breadcrumbs vs. soaked bread in milk
ingredient.
So!!


Today I sauteed the onions and garlic and let that cool.  I had 1 lb. each of ground pork, ground veal,
(don't tell anybody!) and ground beef.  For each pound of meat, I added one egg (which seems de rigueur).
I grated fresh parmesan over the meat mixture.  I had purchased artisan rosemary bread, trimmed the crusts and cut the bread into cubes which were then submerged in milk.  I chopped fresh parsley and added it to the mixture and, it was quite lovely!
Half the mixture was formed and cooked in a dutch oven of oil. 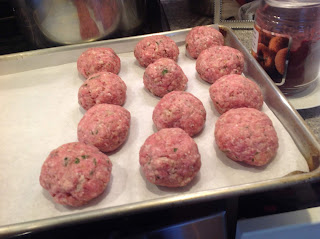 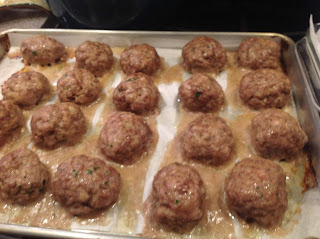 The other half was formed and baked in a 350* oven on a parchment-lined baking sheet.
(I nibbled on pieces of the fried meatballs that fell off and the taste was wonderful, in my opinion.
I ate part of the oven-baked meatballs, and they were actually juicier!  (go figure!)
Now, I am going to submerge both meatballs into my homemade sauce and give the B O B the
ultimate  test!

The results will be in a few days from now!

In the meantime, please share your very special meatball recipes!!!!