Whoever coined the phrase, "easy as pie?"

Pie is NOT easy!

I have had so many failures with pie, I could cry!
(well, I have actually cried!)

My father adored apple pie.  I will never recover from the experience I had when I attempted
to make Martha's Mile High Apple Pie!

I was a Martha follower so whatever she said, I did!

I made this pie for my dear father and when I pulled it out of the oven, it was the most
magnificent pie you had ever seen!

I immediately took it over to my parents' home and my father ceremoniously cut the pie
and........

and the pie itself was way down there.....

I had filled that pie with every apple slice on the east coast!

There is no way those apples could have shrunk down that much!

That was a most humiliating, demoralizing, well, just plain awful day!!!!

It was also the day I realized that PIE IS NOT EASY!!!!!

but, my main conclusion is that  PIE IS NOT EASY! 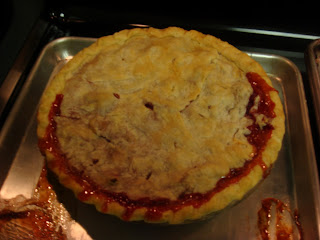