When we purchased this house a little over three years ago, we gutted the kitchen, pulled up brand new carpet in living and dining areas and put in hardwood floors.  We designed and created a kitchen
that I am just mad about!  I truly spend most of my time there!  I would not change one thing!  It is perfect for me.

The third bedroom-loft area was designated as a television room.  While it was small, it really fit the bill.  The living room, being open, was neat and tidy since no television was there.  No glasses, papers, books....stuff all strewn about.

However, we had talked about creating a family room in the basement when we moved in but became involved in all the other projects.  Then BOB in his infinite wisdom decided we really didn't need another area.  After a meeting of the minds, we are currently embarked on the re-do!  (It will be a great place for the grandchildren plus the sports-loving sons-in-law the few times they are all here together!) 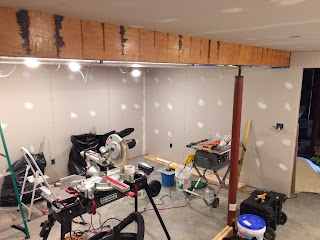 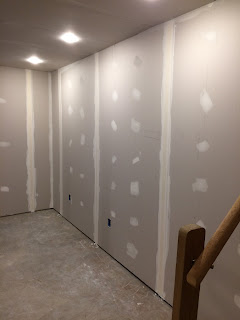 I wanted to install a gas linear fireplace.....they are so cool!  However it was getting expensive,
complicated and we only have our  creative construction crew for a limited time before they start
a really big project so we decided to shelve that idea for now.  We can always install one at a later
time as they made sure all electrical, etc. is in place.

I want to put cabinets and counter at the base of the steps to have a "craft, wrapping center, buffet,
etc." area.  We had a similar set up at our former home.  Picked out lovely cabinets, they are being
ordered and delivered this week!

Bob thought it would be a good idea to utilize the brand new carpeting from the first floor that we had pulled up for the family room.  However, he wanted to be sure we had a sub-floor over the concrete.  He chose a rubber type that is like tiles that interlock and has a vapor barrier.  We will get a good padding and then should be all set!

The dry wall is up and electrical all in place and we are moving along!