It is finally, officially SPRING!
We all thought it would never arrive!
Now that it is here, we are scampering to collect all the flowers and herbs we can get our hands
on!
Usually in this area, we wait until Mother's Day to plant our precious gems.
However, since we seem not in danger of frost, I am heading out tomorrow to the nursery so
I can "transform" our courtyard.
When we purchased this home, the former owner never attended to the courtyard.
It looked like this: 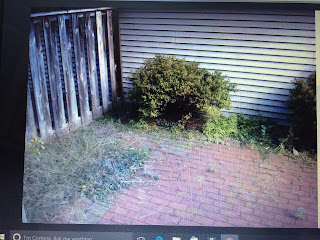 Pretty dismal, right?  I set about finding hardscape companies to rework this area.
Our former home had a huge deck, under roof with skylights, with an adjacent  open deck with an
arbor of wisteria......oh, I loved that space!  Bob had cable television out there for me and I would
enjoy and savor every moment I could spend there!

This courtyard was somewhat daunting!!

Some of the companies suggested stamped concrete. I found that cold and boring.
Some suggested tek decking. That proved cost prohibitive and would not work with our existing
exhaust systems with the water heater, furnace, etc. which, unfortunately, vent out onto the courtyard!
Others suggested pavers.  Boring!!!
I chose Details Landscape in Hummelstown, PA.
The owners' son, Michael, dealt with me and he was so accommodating.  He re-purposed the existing
bricks, supplementing what was needed after flower (weed) beds were removed and created steps (where we had rotted wood not in anyone's code enforcement!)
with more bricks and rustic stones.  He really worked magic in that courtyard!
I was able to utilize some of our deck furniture.  I had purchased the Victoria set from Martha Stewart at KMart (remember when she hooked up with them?) and had everything.....the table, 5 chairs,
the umbrella, the chaise lounge, two rockers, the sofa, the glass coffee table.....all with cushions in
a taupe design.
Since the courtyard space is smaller than our previous decks, I gave a childhood friend of one of my daughter's (Hi, Megan!) the chaise and the rockers.
Michael was so very diligent.  I enjoyed watching his process.
Weather intervened and also a trip to Europe was in the offing (mine!!)  so the process took much longer than originally anticipated.  Michael was unflappable....always calm!  It was near October
that we finally were completed!
Here is the transformation: 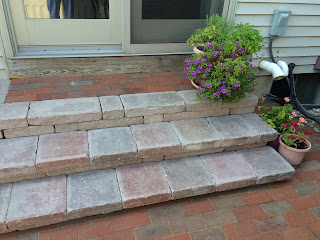 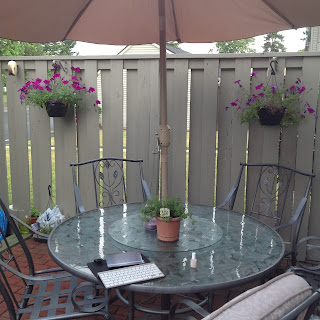 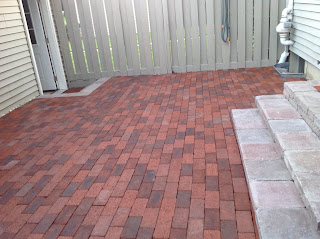 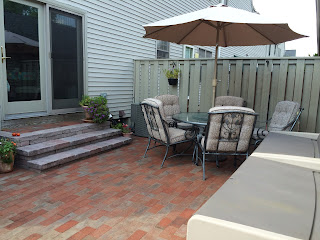 Many years ago, my oldest daughter, Christina, gave me a strawberry pot she had filled with
fresh herbs for Mother's Day .....such a wonderful, creative idea!
I tried to replicate that last year and had some success. (yay!)
This year I am going to attempt to grow wisteria in a pot!  (don't tell Bob!  He always thought
the wisteria was the most invasive thing he ever encountered!)  I am hoping to have it entwine
itself on our privacy fence....although I don't know if that is in accordance with HOA rules.
Surely the next post will be about my great finds at the nursery!!!