In France, the patisseries have been stocking up on Galette des Rois, or King Cake, for the festival
of Epiphany at the end of the Christmas season.  This dessert is typically served only once every year.
This tradition of serving this puff pastry tart can be traced back to the 14th century.
One can include a small porcelain figure (la feve), baked inside the cake and whoever receives the
little favor is crowned king/queen for the day.
In New Orleans a king cake (of a totally different recipe) is associated with the pre-Lenten celebrations of Mardi Gras.  While it is a yeast bread/cake, there is also a small figure of a baby
baked inside.
I was intrigued with the French version and started my research for a recipe.  While they are all
basically the same, some have apricot or pears inside along with the frangipane  while others
have confectioner's sugar on the finished cake or apricot glaze.
I chose a recipe by the great David Lebovitz, which took only a few minutes, using store-bought
puff pastry rather than making my own.

1.  To make the almond filling, in the mixer combine the almond flour, sugar, salt and orange
zest.  Mash in the butter until it is incorporated.  Stir in the eggs, one at a time, along with the
rum and almond extract.  Cover and Chill.
2.  On lightly floured surface, roll one sheet of puff pastry into a circle 9 1/2 inches.  Use a
plate and trim the dough into a neat circle.  Place the dough on a parchment-lined baking
sheet.
3.  Cover it with a sheet of parchment paper or plastic film, then roll the other sheet of dough into a circle, trim it and lay it on top.  Chill the dough for thirty minutes.
4.  Remove the dough and almond filling from the fridge.  Slide the second circle of dough and
parchment off the first dough and spread the almond filling on the first dough on the baking sheet in the  center of the dough, leaving a one inch exposed border.
5.  Brush water around the exposed perimeter of the dough and then place the other circle of dough on top of the galette and press down to seal the edges very well.
6.  To bake the galette, preheat the oven to 400 *.  Flute the sides of the dough and using a paring knive, create a design on top.  Stir together the egg yolk with the milk and brush it evenly over the top but avoid getting the glaze on the sides as that will inhibit the pastry from rising at the edges.
Poke 5 holes in the top to allow steam to escape while baking.
7.  Bake for 25-30 minutes or until the galette is browned on top and up the sides.   Remove from
oven and slide off the baking sheet onto a cooling rack. Serve warm or at room temperature. 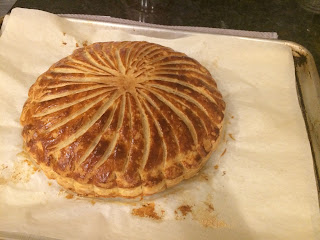