Growing up, I lived in the City on 20th Street.  The family next door was from the coal regions
with six children.  The father was a state police officer and the mother was a marvel - cooking,
baking, making clothes for her children and helping all the elderly in the neighborhood.  Her name
was Dottie Lonardi.
In those days, neighbors knew each other by name, were in and out of each other's homes and all
looked out for each other.  If an elderly neighbor needed a ride to a doctor, no problem.  If someone
baked cookies, there was a plate set out for the children to sample.  When our neighbor on the other
side, a widow by the name of Mrs. Frain, procured a television set in the early 1950's, I used to go
over to her house every day to watch 'Howdy Doody'.
My Mother was a great cook.  However, she did very little baking.  Dottie, on the other hand, would
start baking her Christmas Cookies in early December.  I remember being in absolute awe at the many tins of different cookies that were stacked, seemingly, up to the ceiling.  My very favorite
cookies were the Meringue Kisses.  Dottie always chuckled over this as she used to refer to them as
her "leftover cookies", utilizing the leftover egg whites and nuts.
If Dottie sewed dresses for her daughters, she made one for me as well.  If she sewed pajamas for her
girls, I would also get a pair.  When her husband, Carlo, lined his daughters up for a trim of their
bangs, I was included in the queue.
We moved out to the suburbs when I was eleven and were not in much contact with this wonderful
family.  Living in a single home was a major adjustment for us.  People seemed more reserved.  You
could go for days without even seeing some of the neighbors.  We did get to know the neighbors close by on the street but not much beyond.
Many years later when I was newly married, I decided I wanted to learn to really sew.....not just that
awful apron in Home Economics class!  I bought a Singer Fashion Mate portable sewing machine from a friend's mother (my own Mother went halves with me as I promised to do all her repairs!).
I then called Dottie and asked her if she would teach me to sew.  She happily obliged, telling me
what to purchase and setting a date.
I went to her house in the morning and she took me through a quick sewing course from ironing the
pattern
to how to hem.  (I had chosen a jumpsuit pattern).  When we ended for the day, she handed
me a cassarole to throw in my oven when I got home so I would have a nice dinner!
About fifteen years later I opened my catering business and was able to cater rehearsal dinners for
this family.
When I was in their home I was asking Dottie for the recipe for the beloved Meringue Kisses and
she reached for her "little black book".  It was a very small looseleaf filled with her cookie, cake,
pie, stews, roasts, and pasta recipes which were written in her own hand.  That is when I got the
idea to re-create Dottie's Little Black Book.
I asked her if I could borrow her book to copy it, promising that I would take great care with it.
In those days, one did not have a personal printer.  I had to go to the convenience store where one
copy cost ten cents.  Since she had six children (I figured I would copy for each of them so
they could have their Mother's recipes as well), I needed seven copies of each page. 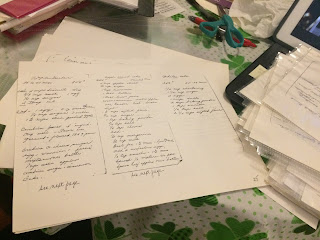 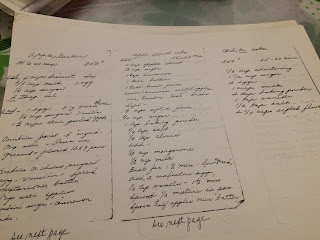 I am currently re-organizing recipes from home, catering, our pastry shop and, Dottie's Little
Black Book (which is bringing back such fond memories) with the hopes of including these in
a soon to be written book.