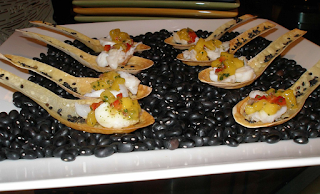 Typically on a Saturday or Sunday, I plan the menus for the week, based on what our social
schedule will be.  As you may recall, recently I have been composing menus based on whatever
is frozen in our two freezers!  (And we have had some surprises!)

From the menus I decide and list what ingredients I may need at the store or farmers market.  (I
confess I even type up these lists!)

Aside from mysteries, I tend to read anything relating to foods.  The combinations and pairings
of many cultures is absolutely fascinating.  Many I am quite familiar with but have perhaps not
attempted a certain recipe.  (I do draw the line at some of Anthony Bourdain's meals and various
insects are not for me!)

With all of this in mind, I am about to embark on a culinary journey.  I have decided not to prepare
any of the tried, true, "go to" recipes in the near future.  Instead we will have shawarma, tagines,
curries and tandooris which are now staples in England.

Proteins with cinnamon, raisins and figs may be a hard sell for BOB, but we will give it a go!

I hope you will enjoy this culinary adventure with me!

Having decided on this, tonight we are having rigatoni and meatballs!!!