Today I had a reunion with three gals (and brother of one) from our old City neighborhood.  We all
moved there in 1950, 1952 and 1954.
We are each now approaching our 69th year.
We have drifted in and out of each others' lives over these many years.  Some have had health
issues which were overcome.  All are still married to their original spouse. (this was noted as
being something of an achievement!)  All are now retired from careers and owning businesses.
It was mentioned that it had been twelve years since we had all been together last.

I was overcome by so many memories.

Ruthie had an older sister, Delores, who was in a high school sorority and was always going to proms and dances.  We would sit on the front porch and watch across the street as Delores would come out in yet another beautiful gown.  She was about six years older than us and we viewed her as a movie star!

Cathy had the big house her father had designed at the beginning of Bellvue Park.  In those days Bellvue Park was a beautiful area with stately homes.  Her father was an architect and had been working on a carriage house for a client.  The client decided to do something else so her father
bought the house for himself.  He was so very ahead of his time with his designs.  I had so many
good times in that house.  When her father re-designed Cathy's bedroom when she approached her
teen years, he designed open shelving, baskets instead of drawers, no furniture.  I thought it the
most innovative and sophisticated!  When we made a bedroom in our basement for our daughter,
Barbara, I replicated that same idea with the open closet and no furniture!

It was with such ease we slipped in and out of topics in our conversation during lunch.....as though all those years had not passed.

And I was struck by how similar we all are.  Some have children, some do not.  I am the only one
with a parent still living.  Yet we all still have the same values, appreciations and expectations as
we did back in the '50's.  We are very much of the same mind.

As I was leaving our delightful luncheon, I was struck by this sameness in our thinking of religion,
politics, the state of the world.  While it gave me a feeling of comfort in my nostalgia, it also made
me think of the next generation.  Will they also be of the same mind in another twenty, thirty years?

When people reflect on the '50's (and most often with a sense of pining for those easier times),
we truly were a different breed.  Today everything is instantaneous.  Technology has overtaken our
lives.

But we were the lucky ones.  We knew what life was like before smart phones, iphones, ipads, etc.
We played jacks, jumped rope, climbed trees and made our own fun.  We would be gone from morning til dinner time playing with our friends and our parents needed never to worry.

I left our luncheon with a sense of unification with my friends, even after all these years. 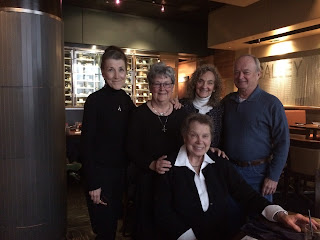