Since we always had planned to use the carpeting removed from the first floor, when we had switched to hardwood flooring,  I had proceeded to obtain three estimates for the padding and installation.  It was during this time that I learned about alternate flooring for sub-grade areas (LVP). However, after researching the luxury vinyl planks, we decided it was much too expensive for this project.

Then the Bob came up with a thrifty idea.....utilize both the carpeting  and the leftover hardwood flooring from the first floor.   This seemed an economical solution to a rather costly venture.

I had already received three estimates for installing our carpeting and had decided to go with the one
who had seemed to provide the most information and with the most reasonable cost.  I gave the
estimator the measurements of the area where we now wanted the hardwood.  He came back with a price that knocked me off my chair.  His numbers seemed very high for a small space.

So the Bob and our contractor both re-measured the area.  I then had the estimator return to our home
to re-measure.  Again, the estimator's numbers were high.....higher than our measurements and none
of us could figure that out.  A room is a room - isn't it? Or, as they say - it is what it is.  (so how can the numbers vary so much?)

Since we were scheduled for installation, I decided to have the installer re-measure and we would go
with his numbers.  Which is what I did.  And, he came up with numbers also different from the estimator - and us!!!

There was a problem with the carpeting.  When the men unrolled the two pieces of carpeting, there were marks on the one and the head installer was worried there actually would not be enough carpet.
They turned the pieces around, cut out the part with the marks and pieced the two together to do the larger part of the room.  However, now they would not have enough carpeting to do our stairs and landing.

The installer was also concerned there would not be enough hardwood.  However, that turned out to
be a false notion as, not only was there enough hardwood to cover the small area, there was also enough to do the landing as well.  Since we did not have something called a stair nose, he could not
proceed with the landing.

The men had cut the hardwood in our courtyard and there was a big pile of sawdust on a snow mound plus all over the bricks.  The one man swept a little,  which actually spread the sawdust into the areas that lead to the garage.  What a mess.

I told the head installer to please confer with the estimator since they did not install carpeting and padding on the stairs and landing, which I assumed would be reflected in our balance due.

I also noticed exactly where the seam in the carpeting was and mentioned that to the installers.  They assured me that the carpet was tight just then and would relax and the seam would not be noticeable.

A short time later,  the estimator called me.  He was outraged that I assumed there would be a decrease in price since the stairs and landing had not been done.  He explained that the installers had to seam my
carpeting and it caused them more work and it was not their fault the carpet had marks and could not
be used for the stairs.  He told me that with carpeting, once the installer touches anything, we are charged.   I was appalled that he was raising his voice to me and also did not understand why I would be charged for work not completed.  (if this is the way of the carpet industry, I would need to be educated as I had no idea they charge for installation ultimately, for whatever reason, not done)

I ended the conversation and went to tell my husband what had occurred.  He offered to call the estimator and I gave him my blessing as I did not want to deal with someone who had become, in my
opinion, so unprofessional.

My husband told the man to come up with an equitable price as he wanted to be fair but he did not expect to pay for padding for the stairs and landing  which the installers had taken with them, nor did he expect to pay for installation that had not occurred.  The estimator said he would re-figure and call the next day.

There was much debris on the hardwood floor area so I used a soft micro-fiber mop to clean the floor.
Then I saw the gouge!  Right in the middle of the doorway on the transition piece was a large gash.
As I bent down to see this closer, I also noticed one of the planks under a cabinet was "popped" up. 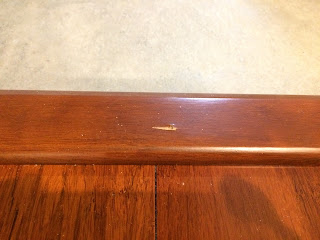 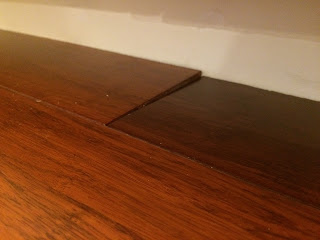 Also, the entire brand new and freshly painted baseboards had a knife mark all the way around the room.....picture a car that had been keyed.  In the center of the one wall of baseboard was a large gouge (what is with these gouges?) and had to be about 1/2 inch deep. 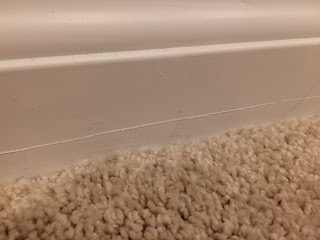 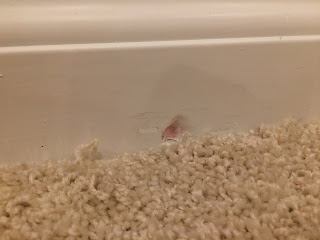 Fast forward to the next morning when the contractor arrived and went downstairs. To say he was displeased to see his pristine work damaged would be an understatement.

When we, as consumers, hire for services to be performed in our home, we are really taking quite a chance.  We are depending on these individuals to be honest, competent - "experts" in their fields.
I have no knowledge whatsoever regarding flooring, carpeting, installation, etc.  That is the exact
reason I was hiring someone to accomplish this!

It took several hours for the contractor's assistant to repair the damage these installers caused on the baseboards.

The estimator called and left a message as to the new balance due him and, again, his numbers do not add up!  (we are still being charged for some installation not done)   However, I am writing a check just so I can be done with this outfit.

I will have to figure out what to do about the popped plank and the gouge in the transition piece as I do not want that company anywhere near my house ever again.

I thought I had done my homework on this phase of the project:  obtaining three different estimates, rather than just one, and  entering into an agreement with a well established company.  My son-in-law told me I should have opted out earlier when I had mis-givings over the measurements......and I do
believe he was right!!!